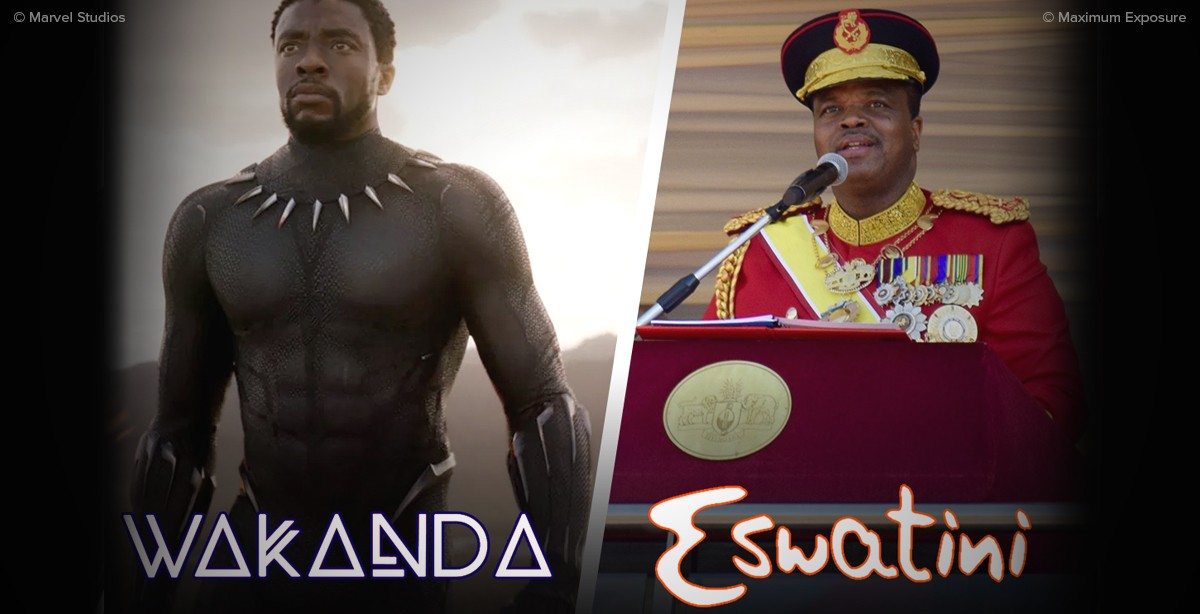 Wakanda vs Eswatini: How Africa’s two ‘New’ countries square up!

2018 was a momentous year for Africa in many ways but not least because two ‘new’ countries emerged from this glorious continent! In April 2018, at a glittering festival celebrating national pride, King Mswati III announced that South Africa’s diminutive neighbour Swaziland would henceforth become ‘The Kingdom of Eswatini’. A couple of months earlier, the more northerly nation of Wakanda revealed itself to the world in Marvel’s acclaimed, ground breaking and Oscar-nominated Black Panther movie, and was then the site of the final battle inAvengers: Infinity War.

Black Panther has just made history as the first superhero movie nominated for Best Picture at the Oscars (plus another 6 Oscar nominations), and has just picked up the top award at the Screen Actors Guild awards for best ensemble cast! So, as 2019 takes hold and with a little while to wait for a movie update on Wakanda, we thought it would be worth celebrating one of the top films of 2018, and seeing how close Eswatini can come to providing a real-life Wakanda experience?! 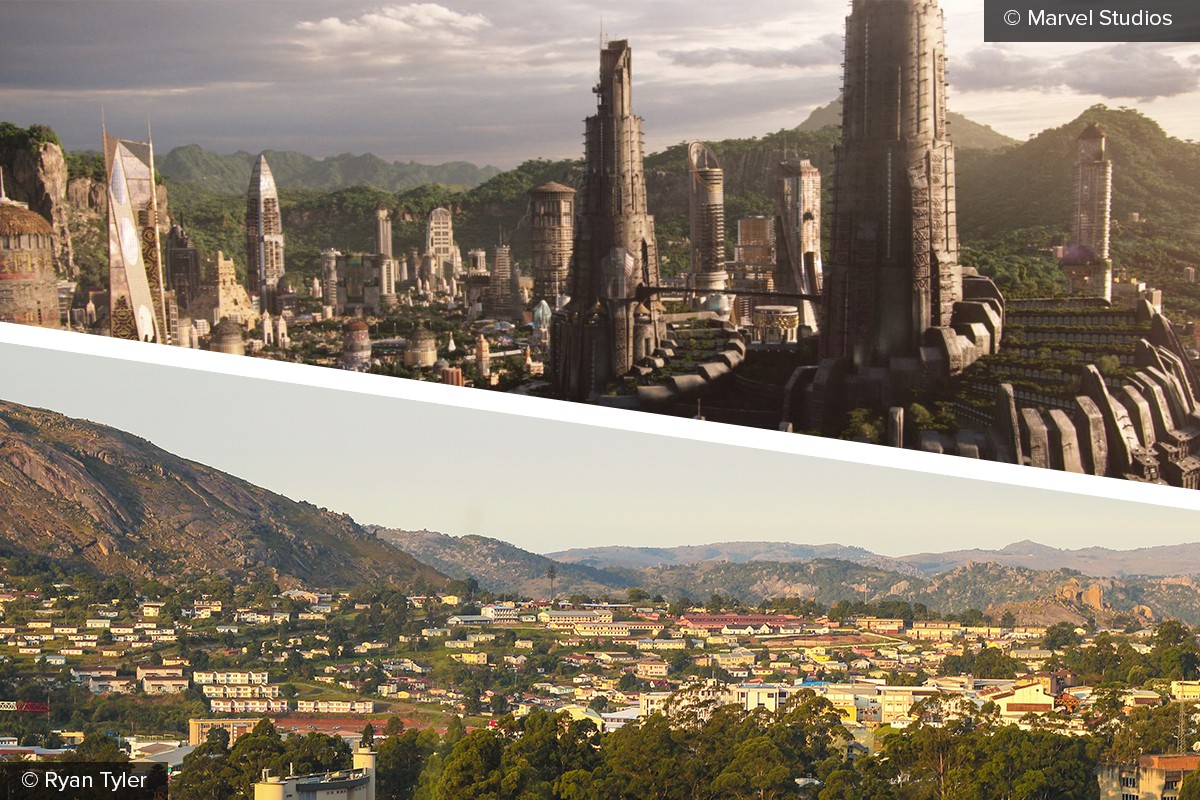 Just like the iconic arrival scene of Blank Panther back to Wakanda as he enters through the dramatic mountain landscape, through the portal to the city of high-tech skyscrapers, Eswatini gives you a similar feeling as you enter via the Ngwenya border from the plains of South Africa into overwhelming, panoramic scenery. As you wind down through the valley between the lush Mhlambanyatsi forest and the rolling hills of Malolotja Nature Reserve towards the capital city of Mbabane with its modern cityscape, there is the same excited feeling of entering a new and beautiful country.

Wakanda vs Eswatini: The magic portal and futuristic city gives Wakanda the edge but Eswatini isn’t far behind. 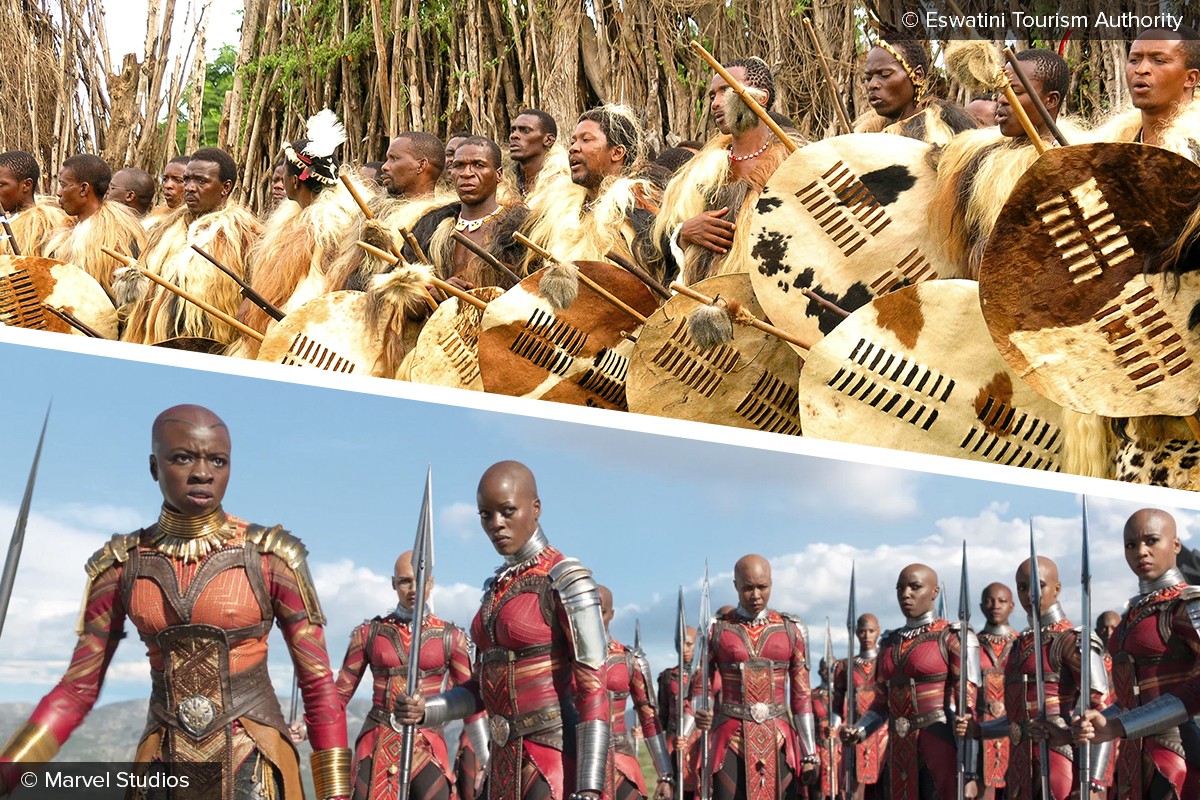 Wakanda’s six tribes have their own distinct identities, traditions and ceremonies. Each favours a particular clothing style and colour and they join together under their King to protect and preserve Wakanda and its independence from the outside world. Eswatini is a country that has tribal unity under one King, being the land of the Swati, and its cultural history is rich and its traditions are upheld and celebrated as strongly as anywhere in Africa. Traditional dress is commonly seen and its traditional festivals such as the Umhlanga Reed Dance and Incwala, are known around the world for their spectacle and authenticity – carried out by tens of thousands of Swatis but usually witnessed by only a relative few lucky visitors.

Wakanda vs Eswatini: Wakanda’s tribal variety is more than compensated by the amazing spectacle of Eswatini’s traditional festivals & ceremonies. 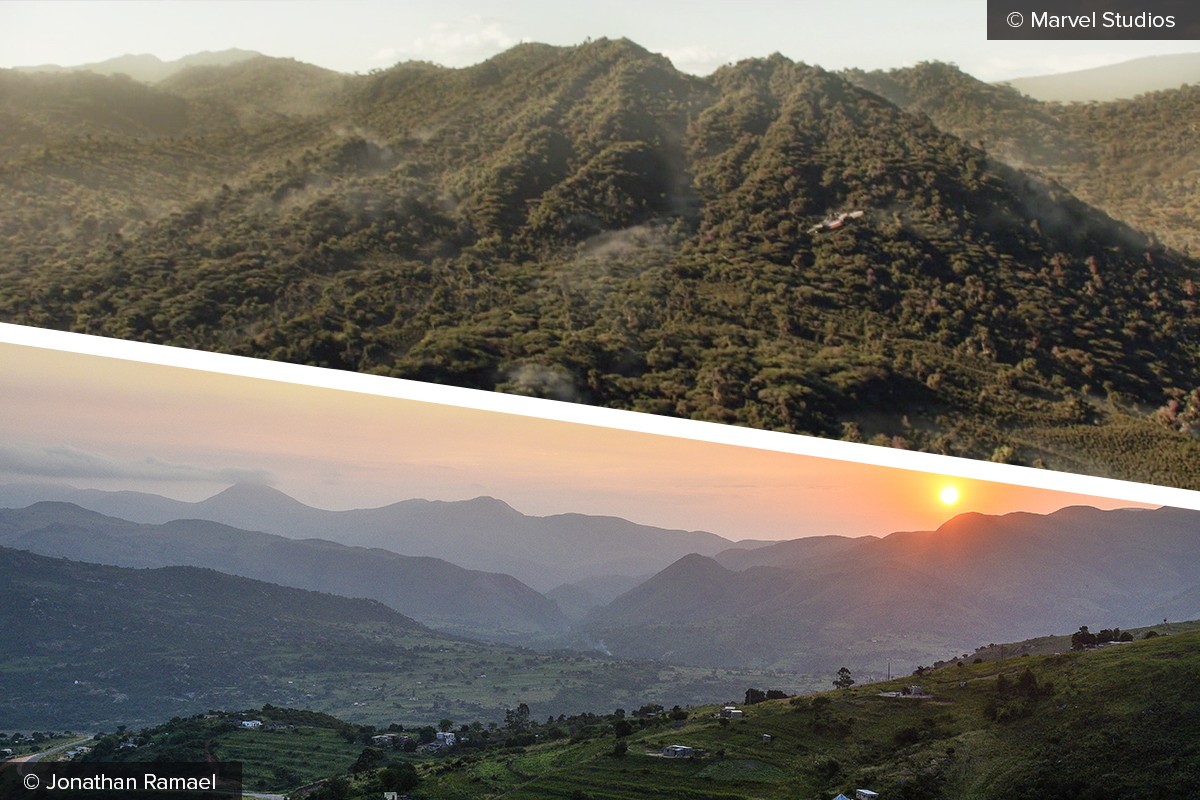 There is little doubt that the natural setting of Wakanda is very easy on the eye, with imperious flat-topped mountains, vertigo-inducing waterfalls and fertile valleys. But Eswatini is no less impressive, boasting those beautiful rolling hills along its western border and the Lubombo Mountains to the east, plus areas of genuine wilderness where rivers cut dramatic gorges, like Ngwempisi. The country’s highlands can be explored on foot, mountain bike or horseback, there is a zip-wire treetop canopy tour through one of the gorges; and rafting and tubing are adrenaline-fuelled ways to travel along its rivers.

Wakanda vs Eswatini: The dramatic and lush scenery of Wakanda is pretty closely mirrored by Eswatini and the latter has a variety of ways to enjoy it. 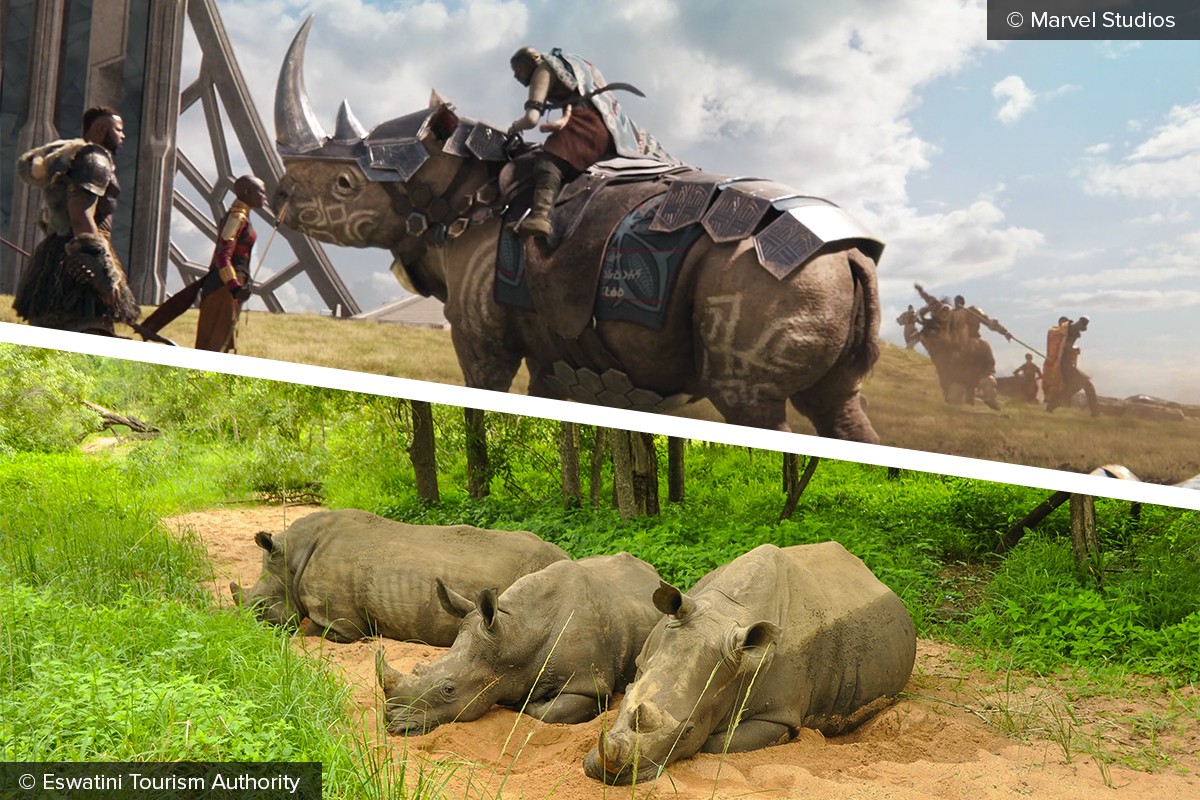 The stand-out animals seen in Black Pantherand Avengers: Infinity Warwere Wakanda’s white rhinos. Bred there as pets and weapons of war, they were seen charging around in their own body armour! Rhinos are also Eswatini ‘speciality’ and the country is known for offering some of the best rhino experiences in Africa, especially tracking these magnificent beasts on foot. It is home to both black and white rhino. Thankfully, none are clothed in armour but Eswatini does have a record of rhino protection that is the envy of its neighbours.

Wakanda vs Eswatini: The rhino is the favoured beast of both countries but Eswatini has black as well as white and tries hard to preserve its populations, rather than using them in battle! It also has plenty more wildlife on show, including all of Africa’s Big 5. 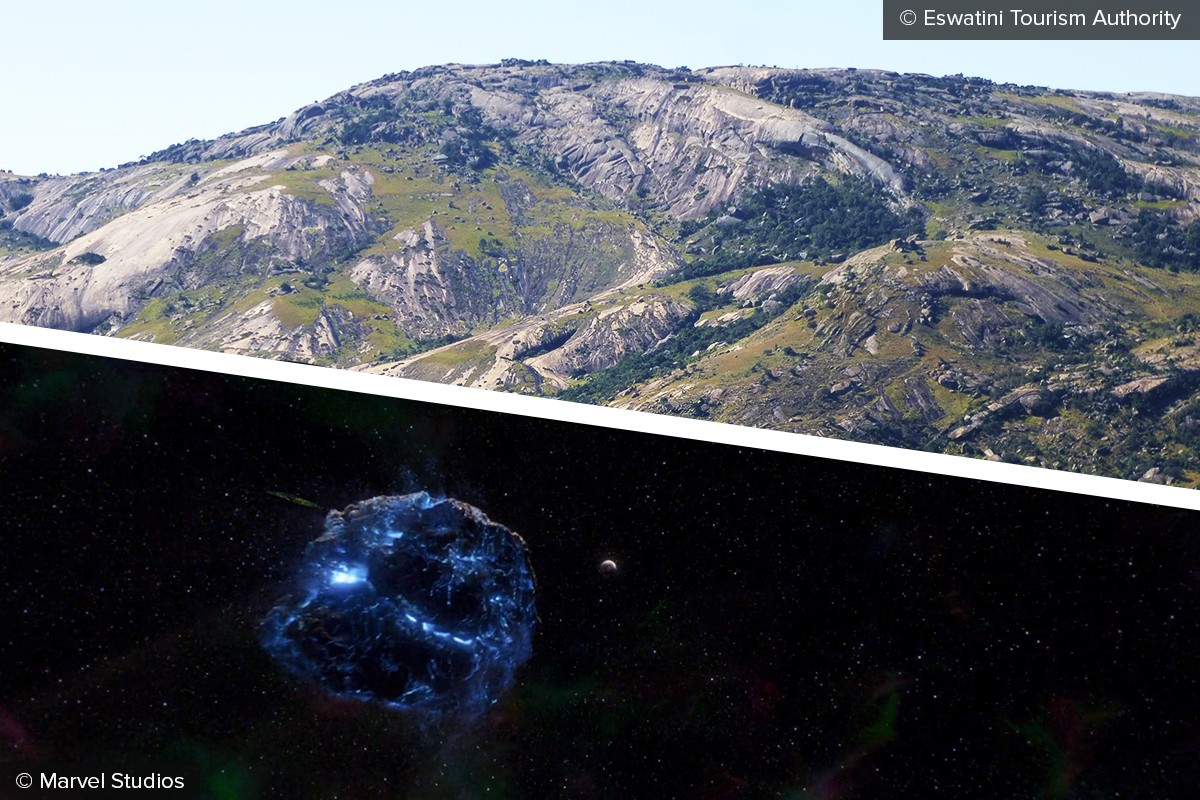 A slightly odd choice of category but one that is of importance to both countries. Wakanda’s advanced level of development, and the powers of Black Panther himself are predicated on the meteorite of vibranium that fell to earth millions of years ago where Wakanda now sits. Eswatini may not have quite the same remarkable material under its soils, but country still has some fascinating rocks of historical significances. The mountains that form its western border are amongst the oldest rock on earth, and the mine at Ngwenya is the oldest mine in the world – having provided iron ore to mankind since pre-historic times. Sibebe Rock, as well as being a beautiful mountain that can be hiked with (relative) ease, is the second largest single piece of rock in the world (after Australia’s Ulhuru) and there is a fascinating Stone Age rock art cave at Nsangwini.

Wakanda vs Eswatini: No other country in the world has anything to compare with Wakanda’s vibranium meteorite, but Eswatini does have a few rock-based offerings that are certainly worthy of attention, even if they don’t contain ‘the rarest metal on earth’! 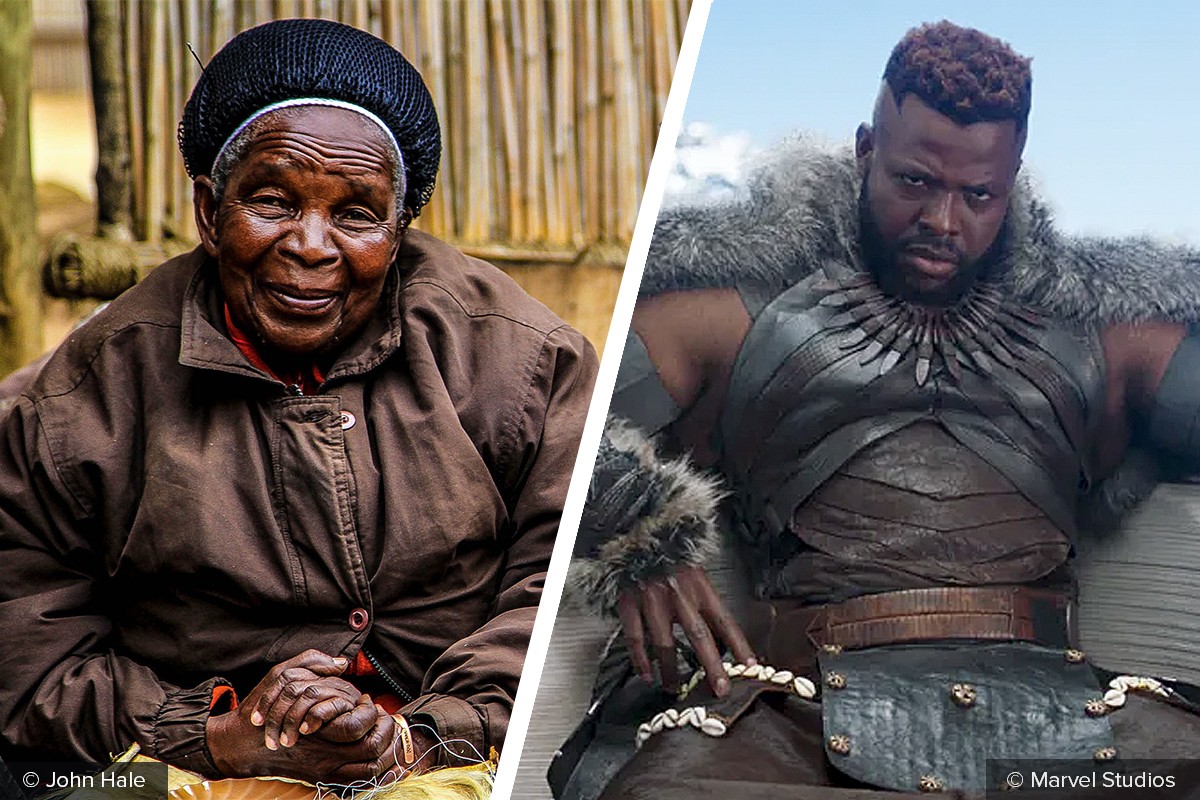 This is where the contrast between the two countries is perhaps most marked. Whilst Wakanda has hidden itself away from the world and shuns visitors (and in case you thought we weren’t sure, is fictitious!), Eswatini is a warm and welcoming country where local people are keen and proud to show visitors their small but beautiful Kingdom. Lying just a few hours east of Johannesburg, it’s very easy to get to – and it does exist!

Wakanda vs Eswatini: If anyone has actually made it to Wakanda, please let us know! Eswatini is ready to welcome everyone and very easy to visit at any time.

Well – there you have it. Wakanda may be off the radar for all but the most committed of Marvel fans but fellow ‘new’ African country Eswatini delivers a pretty good real-world Wakanda experience. It’s somewhere to visit while we all wait in anticipation of the next instalments in the Marvel Cinematic Universe and the next view of Wakanda. We’re rooting for Black Panther at the Oscars and are confident that the next Black Panther film will continue its predecessor’s great job of promoting Africa and African futurism positively to the world. But that’s unlikely to be out until 2021 or beyond. If you can’t wait that long and want more than just an image on a screen, why not give Eswatini a go in the meantime?!