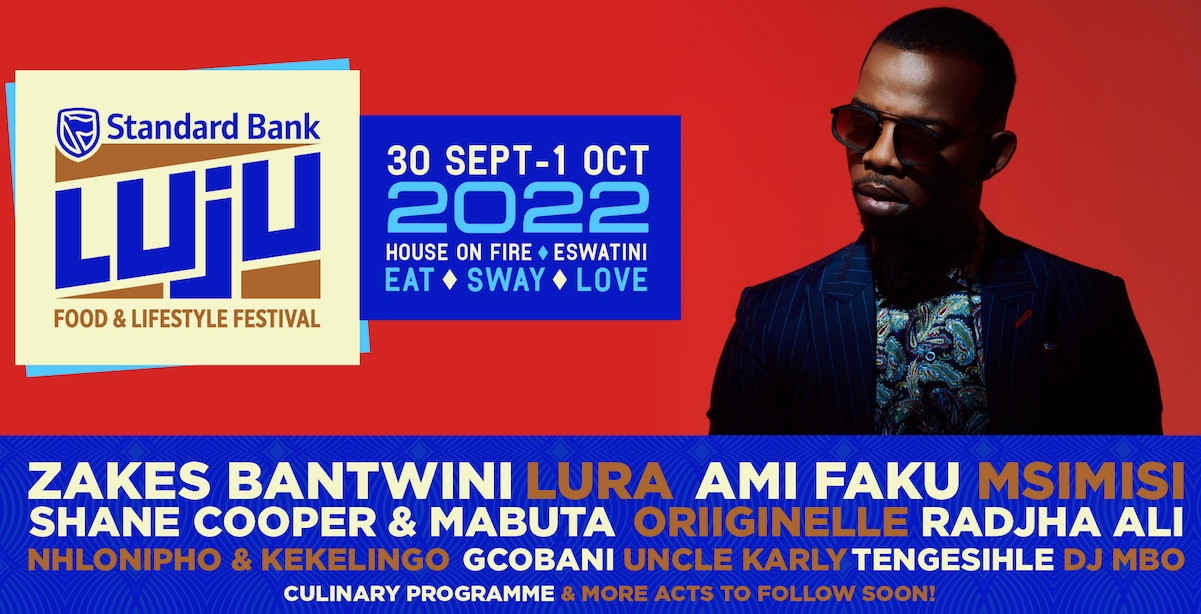 The Standard Bank Luju Food & Lifestyle Festival, back for its 4th edition, is a lavish two-day feast of music, fashion, entertainment, culinary exploits, and connoisseur-led premium wine and whiskey showcases, taking place in Eswatini on the 30th of September and the 1st of October.

Among the exciting acts announced this week are the King of Dance, Zakes Bantwini, and Ami Faku, whose wide range and uplifting music has mesmerized audiences since her debut on Season Two of The Voice SA.

Luju is a unique and sophisticated African-vintage styled celebration of the local, the wholesome, the creative, and the delicious, truly a sensory experience unlike any other.

The Standard Bank Luju Food & Lifestyle Festival ethos, “A Return to the African Future,” pays homage to, and celebrates, Africa’s beauty and style, from the past to the present and onwards to the future. It’s a journey of the senses, a re-imagining of our heritage, and a sneak preview of the design innovations of tomorrow.

Amanda Nomqhutsu Faku is a South African musician, performer and songwriter who rose to fame as a contestant on The Voice SA season 2 in 2017. Ami released her debut single “Ndikhethe Wena”which debuted at number one in South Africa.

Known for his electrifying presence on stage, Zakes Bantwini – affectionately known as the King of Dance – is a versatile singer, producer, and songwriter with a knack for a fusion of sound that employs music from different dance genres.

Gcobani Sisekelo Masuku, best known by his stage name “Gcobani – The African Soul Prince”, is an Afro-Soul guitarist, singer, songwriter and music producer in Eswatini. He sings in siSwati, English and French, and creates music to uplift the soul and heal broken hearts.

Radjha Ali is a Mozambican singer and songwriter who identifies with Afro and Afro-Jazz styles. Radjha discovered his passion for music in childhood, when he sang Indian songs due to the influence of the movies he was watching at the time.

Msimisi’s soulful vocals and genre-crossing rhythms have made undeniable waves, seeing him work with Hip Hop giants Nasty C, Gemini Major, Tellaman and Rowlene, as well as being featured on Red Bull’s “Lift as You Rise” project.

DJ MBO (Mbongeni Sithungo) is one of Swaziland’s most sought-after DJs, whose ability to keep a crowd captivated has earned him the “European DJ” moniker from peers in the industry and fans alike. His focus is not only House music but other genres as well.

Lura’s soul is imbued with the two cultures present in her life; the Portuguese and the Cape Verdean. This album promises to celebrate the Luso-African culture with one of its more important personas: Lura.

Nhlonipho is a talented singer, songwriter and multi-instrumentalist who has worked with renowned South African and international artists such as Ami Faku, Amanda Black, and Samthing Soweto to name a few. Kekelingo is a musician from Soweto, in Johannesburg, whose music journey started in 2001. Kekelingo draws influences from Salif Keita, Khadja nin, Angelique Kidjo and Oliver Mtukudzi.

Shane Cooper is a bassist, composer and producer who is part of the new wave of South African Jazz artists pushing the bounds of music and is known for his work in the Electronic/Dance music world. Mabuta is a 6-piece instrumental band whose sound incorporates elements of energetic live Jazz, Electronic Music and World Music.

Oriiginelle, has always had a passion for music since the early days of her youth. Her early exposure to music was through her father.

Uncle Karly has, over the years, become one of Eswatini’s most celebrated household names in entertainment circles. His ability to fuse expertise and experience in his approach has rendered him distinctive in presenting his work and has aided him to strike a balance between both matured and youthful entertainment.

Tengesihle Mimi Gwebu is an opera singer who aims to express opera as an art form that tells a story. She has won several competitions nationwide, including the yearly Standard Bank Choral Music competitions, where she’s been the reigning soprano champion from 2021.

Find out more about the Luju Festival on their dedicated page here.