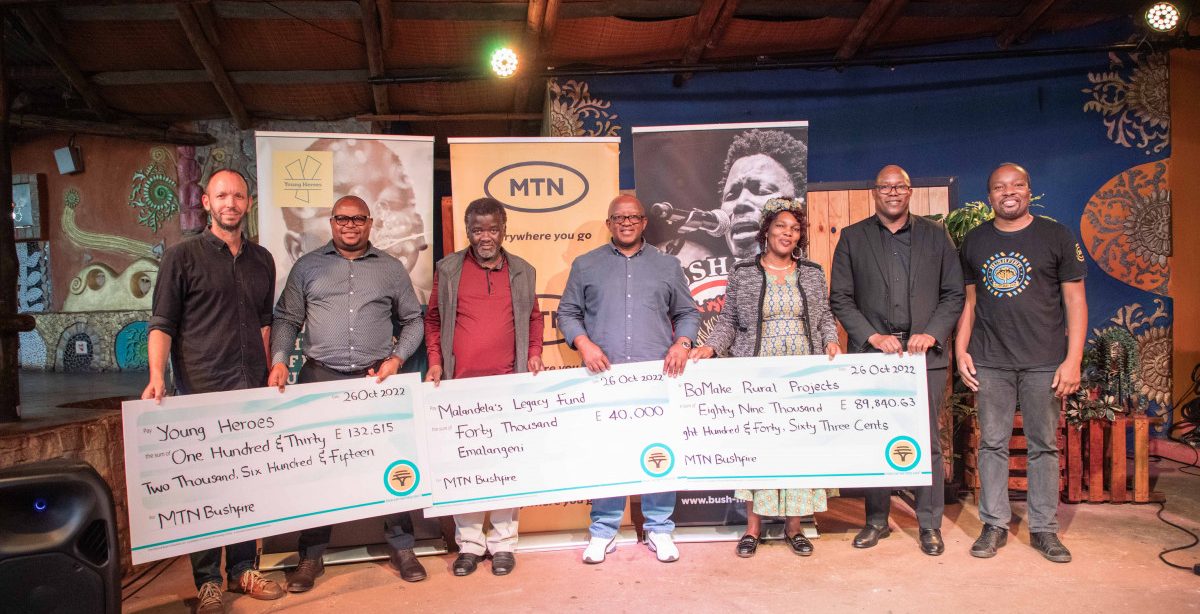 MTN Bushfire is pleased to announce E262,455.63 in sponsorship for festival beneficiaries in 2022. Cheques were presented to Young Heroes, boMake Rural Projects and the newly established Malandela’s Legacy Fund on 26th October, 2022, at House On Fire.

This sponsorship is only made possible by the collective effort inspired by the “Bring Your Fire” call to action to make a positive difference in our communities. Grateful thanks go to the range of partners involved in making the MTN Bushfire festival such a memorable experience, and most especially the festivalgoers who purchase the tickets and merchandise used to sponsor the festival’s beneficiaries.

MTN Bushfire is more than simply a music festival, it is an expression of social consciousness and an engine for local community development. MTN Bushfire’s commitment towards creative activism to effect positive, meaningful, sustainable change has earned the festival a worldwide reputation for its visionary, authentic and inclusive approach, winning the ‘Best Responsible Event’ Award at the 2017 African Responsible Tourism Awards.

“From the onset of MTN Bushfire, we have shared the belief that we all have to play a more conscious and active role in developing and supporting the communities and environments within which we live. MTN Bushfire’s call to action, Bring Your Fire, leverages the transformational power of the arts to inspire collective action on the social and environmental challenges of our time,” stated MTN Bushfire festival Creative Director Jiggs Thorne.

The proceeds of the sponsorships are to be used primarily in the Lobamba Lomdzala constituency in which House On Fire, the venue for the MTN Bushfire festival, is located.

The Honourable Member of Parliament for Lobamba Lomdzala, and Chairman of the MTN Bushfire Board, Marwick Khumalo, likened MTN Bushfire to a charitable organisation because it is so community based, thanking the audience for attending “this important milestone, where we give back to our fellow Swazis, the ones less privileged than us.”

Young Heroes, which assists youth orphaned and made vulnerable by HIV/AIDS, has been supported by the MTN Bushfire festival since inception in 2007, and benefits from a portion of every ticket sold for the festival. The Director of Young Heroes, Khulekani Magongo, was presented with a cheque for E132,615 from MTN Bushfire.

BoMake Rural Projects, a community-led non-profit organization is a community-led non-profit organisation working with women artisans to make a sustainable impact through equitable social and economic community development projects. BoMake manages and benefits from the sale of all festival merchandise, this year receiving a cheque for E89,840.63, which was accepted by boMake Director Nozipho Sasha Thorne and boMake Artisan Board Member Sibongile Zwane.

A cheque for E40,000 was also accepted by Indvuna Fakudze, on behalf of the Malandela’s Legacy Fund, a newly established initiative to support community development projects in Lobamba Lomdzala. The Malandela’s Legacy Fund was created to honour Peter ‘Malandela’ Thorne and Jenny Thorne’s lifelong commitment to their guiding philosophy that people and businesses should be actively involved in the communities they live in, an ethos that forms the core of the festival’s Bring Your Fire philosophy. Indvuna Fakudze expressed his gratitude to the Thorne family for continuing their parents’ legacy of community development.

MTN Bushfire offers its deepest thanks to the people of Lobamba Lomdzala, who continue to give their support to this festival.

More about the Beneficiaries

Founded in 2006, boMake Rural Projects is a community-led non-profit organisation working with women artisans to make a sustainable impact through equitable social and economic community development projects. To date, they have impacted the lives of more than 20,000 community members through programmes focused on education, health and sustainable livelihoods. https://bomake.wordpress.com/

The latest MTN Bushfire social initiative, the Malandela’s Legacy Fund, was launched this year on behalf of the Thorne family to honour Peter ‘Malandela’ Thorne and Jenny Thorne’s lifelong commitment to their guiding philosophy that people and businesses should be actively involved in the communities they live in, an ethos that forms the core of the festival’s Bring Your Fire philosophy.