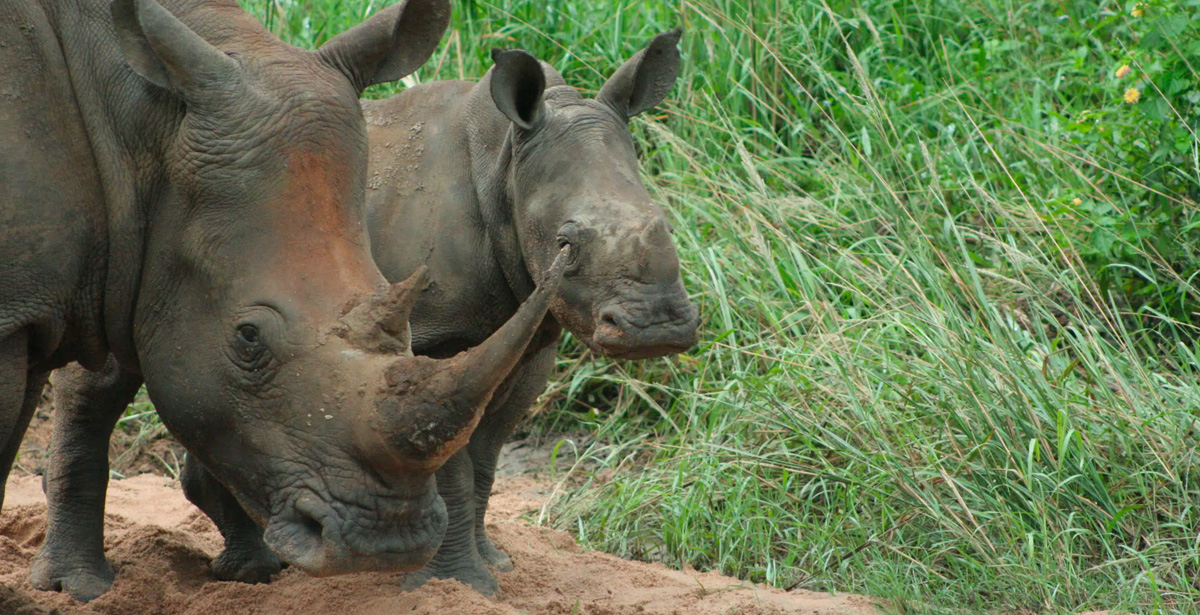 Jenny Bowen from Sense Earth, a UK tour operator that specialises in Eswatini holidays, once had the incredibly opportunity to feed baby white rhinos! Find out why and how she got on in this blog below.

It’s not often that you’re woken at midnight to feed a couple of baby white rhino. I got roped into helping with this unusual task in exchange for a night’s bed in Eswatini.

I’d been really lucky as I had been invited to go and stay at Mkhaya Game Reserve in Eswatini and had offered to help out while they put me up. It was late, and I could hear the snuffling, snorting and mewing of the two baby rhino calves anticipating their midnight feed. Needless to say I was a little bit blurry eyed as I staggered downstairs to prepare their formula milk. I imagine it is rather similar to feeding small children except that the quantities are vast! White rhino can get through a lot of milk. We are talking litres here…

Why feed the White rhino calves?

The white rhino at Mkhaya had been born when a bad drought had really begun to impact on grazing animals. White rhino are grazers and therefore need lots of grass each day, an enormous amount. Unfortunately, due to lack of grass, the mothers had not been able to lactate. As a result the young calves were removed from the care of their mothers so they could be hand fed.

During the day the rhino roamed freely in a very large enclosure and spent their time in the company of a couple of Emaswati ladies who seemed to be able to expertly control these very boisterous individuals. The first time I saw them I spent 15 minutes hiding behind a tree whilst the small rhino (a small rhino being over 200 kg) cavorted on the other side. I knew very well that I would certainly come off worse if contact was made.

There were also a number of large tractor tyres in the area so that suckers like myself could dive into them for safety. Rhino can not jump, so would not be able to manoeuvre themselves over the tyre. I used the tyres a lot! In the evening the rhinos came in for the night and stayed in a room in the house. A room had been made rhino proof with secure doors, matting on the floor and furniture blocking the door. 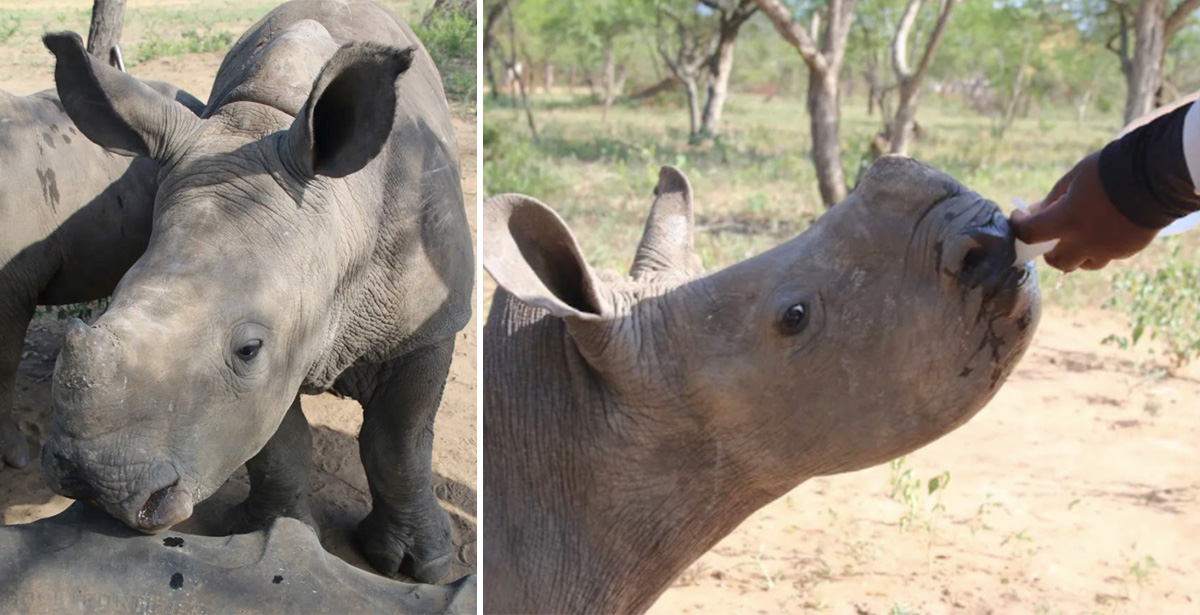 When to feed a baby rhino

These rhino were being fed every three hours around the clock. This was pretty exhausting for everyone concerned, especially those doing the midnight and 3 o’clock feed. And this is where I came in. I was shown how to mix up the formula for each of the rhino. The feeds were slightly different because one calf was male and the other female, they were also different sizes. I was also given instructions on how to sterilise everything before and after feeding.

How to feed a rhino calf

The formulaic milk was made up in 2 litre plastic coke bottles with a teat put on the end. While feeding, the two main concerns were to stop the rhino from guzzling the milk too quickly and to prevent them from sucking the teat right off the bottle. So I was shown how to hold the bottle. With my index and second finger wrapped around the teat I could alter the milk flow by pinching the teat and also keep hold of the teat if it got sucked off the bottle. The easiest way to do all of this was to shove your fingers, with teat, into the rhinos mouth!

So there I was at half-past midnight, holding 4 plastic bottles of milk and warm water, listening to the sound of overexcited rhino calves anticipating being fed. As they are rather boisterous and over exuberant in feeding we could lean over a chest of drawers blocking the door. When you opened the door you were face-to-face with the chest of drawers and not charging rhino. I could then lean over the barrier and feed the rhino without having my shins fractured. They were very demanding, probably because they were very hungry, but once the teats were in their mouths they calmed down and were easier to manage.

After a swift change in bottles and ensuring both rhino finished their feeds at the same time, the youngsters settled down. After I’d finished sterilising bottles and prepared for the 3 o’clock early morning feed, I could hear the gentle snoring of rhino behind the door. Who knew that white rhino snored!

It was a wonderful experience being that close to young rhinos, and I can not wait to get back to Mkhaya and help out with the feeding again. There are not many people that can say that they’ve had their fingers sucked by a baby white rhino!